Following intensive, independent testing by renowned Universities in both North America and United Kingdom,  we are releasing a new range of security products – especially prepared forensic solutions suitable for use on heritage items, ranging from fine art, antiques to antiquities and other collectables.

In addition, after consultation with Conservators from some of the World’s most renowned museums, we have developed a new range of products that enhance conservation techniques without compromising the fundamental principal of reversibility.

For years, international law enforcement agencies have struggled to prosecute Offenders and repatriate stolen artifacts due to the difficulty in identifying an object’s origins and proving the items stolen. What they needed was a sure-fire, easy method of identification, that would help them prosecute Offenders, resulting in the creation of a powerful deterrent.

Enhance the security of your collection or museum objects with SmartWater B67™, our new forensic product, specially prepared following consultation with Conservators at world renowned museums. Although guaranteed to be completely reversible, SmartWater B67 compliments existing cataloguing practice simply by switching from using traditional top coat varnishes to one containing a unique, liquid forensic ‘fingerprint’ for the exclusive use of your Museum or collection.

Included in the annual license fee are a 20ml bottle of SmartWater B67™. Not only will it protect your collections from theft but, for Museum Curators. it provides an extra layer of protection against potential ‘substitution’  when loaning out to others institutions.

Complete and submit a quote form below, providing details of your museum or collection and we will calculate the cost an annual licence for our scientists creating an unique SmartWater B67 forensic liquid ‘fingerprint’ for your exclusive use.

Once you have secured a unique license to use SmartWater forensic products, you will have access to our proprietary crime deterrence packages,  available in three and five years terms, offering an array of different warning decals for display around your premises to warn off thieves.

For the protection of ‘at risk’ artifacts, objects or collections

It is a sad fact that, increasingly, the World’s heritage, ranging from museum objects to historic artifacts, are under threat of theft from international crime gangs who,  due to the difficulty in proving the provenance of a suspected stolen item,  have little to fear from law enforcement agencies.

SmartWater® forensic technology is regarded as one of the most powerful deterrents in the World, proven many times both operationally and academically by law enforcement agencies.  The degree of traceability it provides represents a real threat to criminals, both the thieves and the ‘fences’, those unscrupulous people who buy the items from the thieves, knowing or believing them to be stolen.

SmartWater Robust™ are special traceable liquids that have been independently tested (full reports available upon formal request). and passed for use by SmartWater scientists on antiquities, collections and museum objects comprised of the following substrates listed below.

With potentially millions of individual codes available, no two SmartWater traceable liquids are the same, with each having its own unique forensic code, meaning that marked items can be traced back to where they came from. It is practically invisible to the naked eye but glows bright yellow under UV ‘black’ light and our scientists only need a speck to recover the embedded data.

Complete and submit a quote form below, providing details of your museum or collection and we will calculate the cost an annual licence for our scientists creating an unique SmartWater forensic liquid forensic ‘fingerprint’ for your exclusive use.

Once you have secured a unique license to use SmartWater forensic products, you will have access to our proprietary crime deterrence packages,  available in three and five years terms, offering an array of different warning decals for display around your premises to warn off thieves.

More SmartWater Robust™ solutions will be made available to license holders via our website. 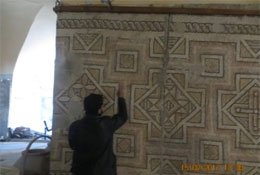 In a joint US-UK initiative, financed by the SmartWater Foundation, the not-for-profit arm of the international crime fighting company, a team of undercover operatives and Syrian Archaeologists have successfully applied SmartWater’s unique forensic ‘traceable liquid’ to some of Syria’s most treasured historical artifacts under threat of imminent theft.

This includes two precious mosaics from the UNESCO World Heritage designated site of the Dead Cities. All are at high risk of being stolen by terrorists and criminal gangs and therefore lost forever. This process renders them traceable back to Syria if found anywhere in the World.

The operation took place in the Idlib region, which has been the subject of indiscriminate gas attacks and therefore, extremely hazardous for the team involved.

The situation is so bad that many Archaeologists and Conservators operating in these areas of the World believe that “retention trumps conservation”. Their belief is that the enhanced forensic traceability afforded by SmartWater® technology increases the risk to potential thieves as it enables law enforcement agencies to identify and prove provenance of suspected stolen artifacts.

The SmartWater Foundation is working in partnership with the War Memorial Trust to locate, log and protect as many of the 100,000 war memorials there are in the UK, providing all the products, services and support, free of charge.

Frequently, war memorials are the only remaining public record of those who made the ultimate sacrifice in armed conflicts and are a physical representation of the Community’s pride, grief and commitment to remembering them.  Many were paid for by the communities themselves and have remained the focal point for Remembrance Day parades for decades.

Sadly, in recent years, a considerable number of these memorials were stolen by thieves who sold them as scrap metal, but the extra protection provided by the application of a unique SmartWater® forensic solution reduced theft to almost zero.

HRH The Duchess of Cornwall is Patron of our partners the War Memorial Trust and has actively supported In Memoriam 2014 including, on occasion, applying SmartWater to a number of high profile, historic memorials (as seen on the image on the left).

The castle in Nuneaton, Warwickshire was originally built in 1125 by Hugh de Hardreshull but it became unused when Robert de Hartshill was killed in the Battle of Evesham in 1265, before being rebuilt by John de Hardreshull in 1330.

The remains of the Manor House and Castle still exist but have suffered from years of neglect. They are on English Heritage’s at risk register and the owner of the remains has set up a trust to look after it.

Local police and the rural crime coordinator were working with the custodians of the castle to improve security and find those responsible for stealing the historic stones. They were approached by a representative of the SmartWater Foundation, who offered to help create a deterrent by marking the stones with a unique SmartWater solution that would enable to police to prove the provenance and bring a prosecution against the thieves.

“Syria’s cultural heritage is a vital part of our identity; it is what makes a Syrian a Syrian. Yet this heritage is under daily assault from looting and destruction by thieves and terrorists. SmartWater forensics are safeguarding Syria’s future by helping us prove the origin of these stolen and trafficked objects which is a major milestone in our efforts to preserve Syria’s history.”

Professor Amr Al-Azm, who led the project in Syria

This ground-breaking application to the Cultural Heritage Protection sector was made possible after extensive testing of SmartWater’s newly developed forensic traceable liquid by Reading University’s Dept. of Archaeology in the UK and Shawnee State University in the United States.

As a result, SmartWater has released a special ‘heritage’ traceable liquid for use on the following substrates:

SmartWater laboratories are accredited to the highest international standards recognized by criminal justice systems throughout the World, together with organizations such as the American Society of Crime Laboratory Directors and the UK Home Office.

The SmartWater Foundation was formed in 2009 as a not-for-profit company, limited by guarantee, with the primary aim of providing free or subsidized access to cutting-edge SmartWater® forensic technology to communities without the necessary financial resources to combat urgent threats to property and cultural heritage. As a result of our track record of helping law enforcement agencies secure convictions in Court, SmartWater has been proven, both operationally and academically, to be a most powerful deterrent to crime.