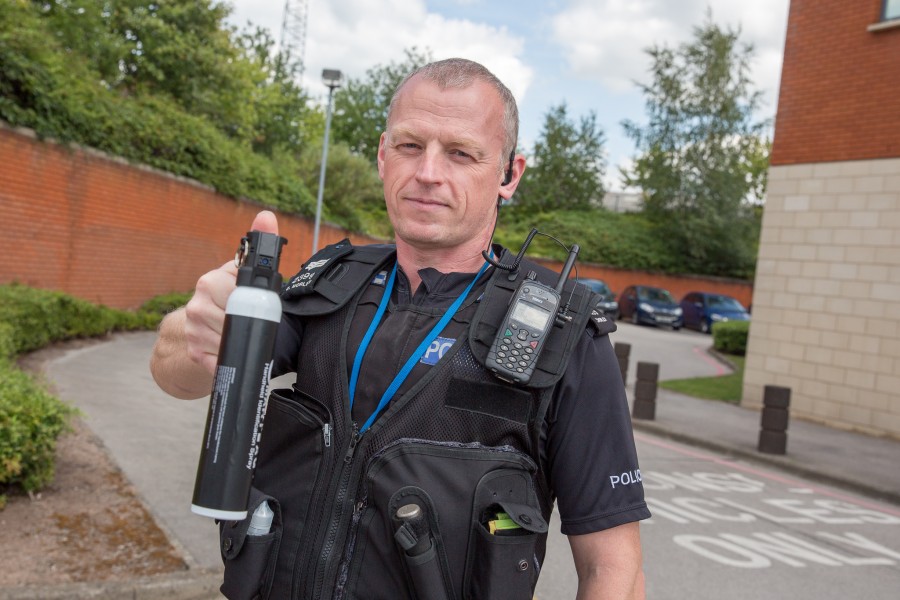 People who ride off-road motorcycles illegally now face an additional threat from Nottinghamshire Police, as they have become the latest force to adopt SmartTagTM identification spray. The invisible spray will make it almost impossible for illegal riders to avoid capture.

Concerned by an increase in crime and anti-social behaviour caused by people driving off-road vehicles across local farmland and beauty spots, police in the Ashfield district have responded by this new innovation, created by risk management experts SmartWater Technology.

Each SmartTagTM canister dispenses an ‘invisible’ liquid containing a unique forensic code, that will link suspects to a specific location or incident.

The liquid glows yellow-green under ultraviolet (UV) light. Officers can use UV detection torches examine suspect vehicles and individuals and place them both at the scene – even if the offence in question happened many weeks ago. The spray is totally harmless but will remain present on skin, clothing and other surfaces for more than two months.

Sergeant Colin Morley explained: “Stopping and apprehending people on off-road bikes is very difficult so we’ll be using this new tool to rebalance things in our favour. Very often we have a very good idea who offenders are but struggle to prove beyond doubt that it was them at a particular time and location. This spray is an absolute game-changer for us as it will now allow us to prove that beyond doubt.

“A good example of how we may use this involves people riding on the road on bikes with no number plates. It’s almost certain that these bikes are also un-taxed and un-insured, but the only way for us to apprehend the rider at the moment is to catch them in the act, which can be difficult when they are riding a high-powered motorcycle capable of escaping off-road. With this new tool, we can simply spray them from the patrol car – safe in the knowledge that we’ll at least be able to catch up with them later on.”

The SmartTag spray canisters deploy a stream of uniquely coded liquid to accurately, forensically tag offenders up to ten metres away.

Inspector Mark Dickson, responsible for neighbourhood policing in the Ashfield district, added: “People consistently tell us that this is a serious issue of concern and I am determined that we do something about it. People who ride bikes recklessly in this way are not only causing noise nuisance to people for miles around, they are also putting lives at risk.

“It is totally unactable behaviour and I am delighted that we now have an additional tool at our disposal to catch the people responsible. And when people can be assured that we will seize bikes, we will fine people and will do our very best to ensure that they are prosecuted for all the offences they have committed.”