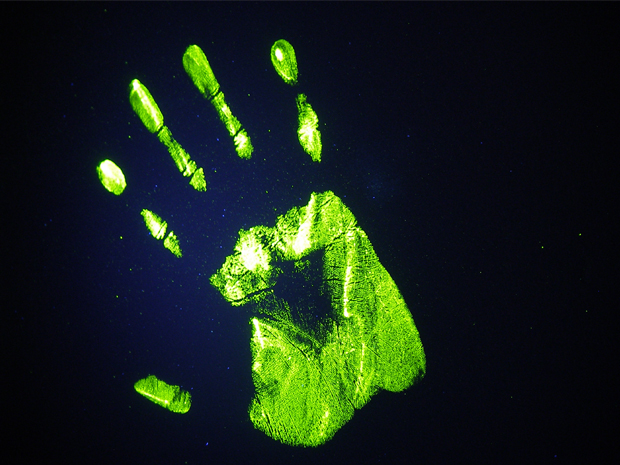 In a countrywide first, cutting edge SmartWater technology is helping West Mercia Police tackle domestic abuse in Shropshire, as a pilot scheme is hailed a success.

The scheme has seen SmartWater forensic traceable liquids used at the homes of victims of domestic abuse.

The SmartWater product in question can transfer onto anything it comes into contact with – including skin and clothing. It is only visible under an ultraviolet light meaning those who come into contact with it could be unaware that it has left a mark on them. It stays on the skin for weeks and SmartWater scientists only require a speck of the solution to be able to forensically determine where it has a come from. SmartWater is also extensively used to mark property, making it uniquely identifiable.

Over the past year, police have been using SmartWater at the homes of domestic abuse victims in an effort to deter perpetrators from returning to the home and to provide victims with reassurance that their security has been enhanced.

During the pilot, which was made possible thanks to funding from West Mercia Police and Crime Commissioner John Campion, 20 victims of domestic abuse had SmartWater used in their homes with the perpetrator also informed that it had been used, potentially providing the police with irrefutable forensic evidence if they returned.

Only one victim saw a repeat offence, where an outbuilding was broken into and not the main building. The victim was not harmed.

Shropshire’s Designing out Crime Officer Steve Loveridge led the pilot in Shropshire and has received the backing from the local Police Commander, Superintendent Jason Wells.

Supt Wells said: “Victims of domestic abuse are some of the most vulnerable people in our communities and we want to make sure we do all we can to support them and make sure they are safe and feel reassured.

“We know perpetrators will try to return to see their victim and often victims will be too fearful of reprisals to tell us, it takes great courage to report domestic abuse and we know many victims will have suffered more than the one incident they report to us.

“By using SmartWater technology we are not only sending out a warning to perpetrators that we will know if they have tried to visit the home of their victim but if they do we will be able to prove it.

“The initiative is one of the many measures we have in place to ensure victims of domestic abuse have the support they need. We have officers who have been specially trained and are dedicated to working with victims of domestic abuse, they understand the complexities of it and will ensure victims have the appropriate support and I would urge anyone who is a victim to get in contact with us.”

SmartWater technology has traditionally been used to deter and prevent thieves, this is the first time it has been utilised to support and reassure victims of domestic abuse in England.

SmartWater’s Director of Security Services, Gary Higgins said: “Shropshire is the home of SmartWater, we are proud to be playing our small part in helping West Mercia Police and its Partners do everything possible to make some of the most vulnerable in our Communities feel safer in their own homes. Our products not only make property uniquely identifiable to its owner but can also categorically link offenders to the scene of their crime. We are delighted with the positive outcome of the trial, especially the fact that it has had such a dramatic impact on repeat offending. We look forward to seeing the initiative evolve and provide even more help where needed”.

In the pilot the technology was only used with the victims consent and where the perpetrator was either charged or bailed away from the address.