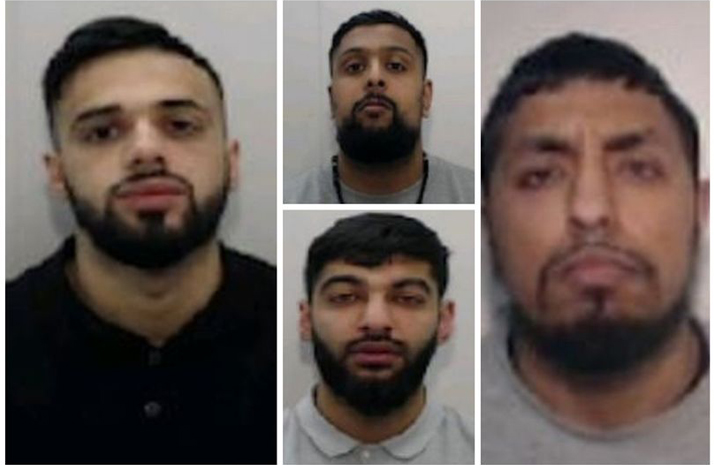 A gang that carried out 11 raids on cash-in-transit vans across Greater Manchester and stole more than £90,000, is now behind bars thanks to SmartWater forensic technology.

Sajjad Hussain, 28, even booked days off from work or called in sick to join his partners in crime Abubakir Iqbal, 30, Anas Khan, 26, and Shazad Mahmood, also 26, on a series of raids targeting business premises that saw security guards attacked with hammers.

The prolific gang struck in broad daylight targeting guards picking up cash takings from restaurants and shops over a period of 3-months, starting in November 2018.

They were finally foiled in January 2019 when officers spotted their getaway car after a £25,000 robbery in Halifax, West Yorkshire. The vehicle made off at speed and in an attempt to evade arrest but crashed into a bridge. 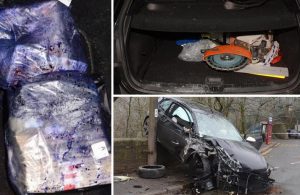 All four were detained at the scene and the vehicle was found to contain bundles of money, a Stihl circular saw and a hammer, as well as 5 sets of number plates.

Upon further inspection, officers detected traces of SmartWater Ink on clothing, shoes and the circular saw. The ink contains a forensic code unique to each cashbox, that when forcibly opened, marks the cash inside.

Deployed alongside high-visibility warning signage, SmartWater is an excellent deterrent as it links criminals back to their crimes and has impeccable record in the courts, with thousands of other convictions to its name. 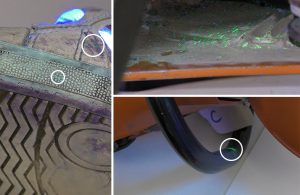 Traces of SmartWater evidence (shown under UV light) on the Stihl circular saw (top and bottom right) and footwear (left).

Upon further analysis at SmartWater’s laboratory for analysis, multiple traces of the unique SmartWater Ink, which is detectable by its trademarked yellow-green glow under ultraviolet light, were identified, linking the gang to 4 separate cashboxes.

Now all four have been jailed for a total of 77 years, thanks to SmartWater’s ability to place them at the scene off their crimes.

During Court proceedings, a SmartWater scientist, in attendance, was questioned as to whether SmartWater evidence was compliant with the latest Forensic Science Regulator’s Codes of Practice. This was promptly confirmed, alllowing the evidence to be accepted into Court.

Khan and Iqbal were both locked up for 21 years each, whilst Hussain was given 18 years and Mahmood, 17 years.

“Operation Mowbray was a reactive investigation in to a GMP based group of criminals involved in eleven violent, high value CVIT robberies across GMP, Derbyshire and Yorkshire. The group of offenders were sophisticated and planned, disposing of clothing and vehicles following each offence.” Det Sgt Rick Castley of Greater Manchester Police said.

“Following the arrest of the suspects a Stihl saw was recovered, which had been used to force entry to cash boxes. Forensic examination identified that Smartwater from three of the offences was present on the saw. Smartwater was also recovered from money the offenders attempted to launder through electronic gaming machines following offences.” he added.

“The evidence provided by SmartWater formed an integral part of a complex conspiratorial case at trial and resulted in the conviction of four offenders who received a combined sentence of 77 years in prison for their criminal ventures.”