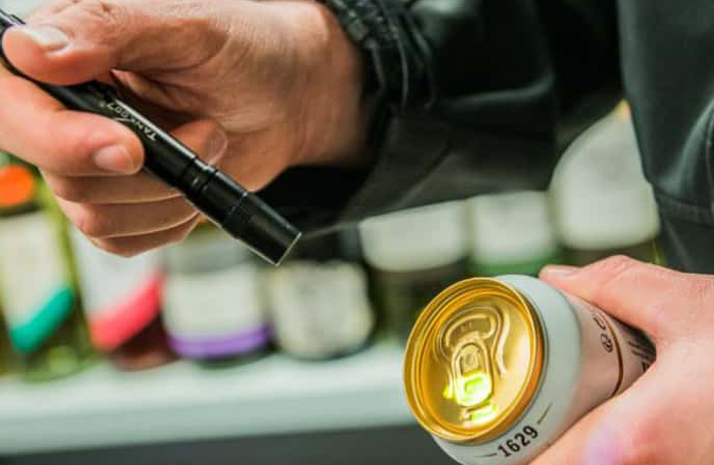 Wakefield BID – which is funded by businesses to support and promote the city centre – has pledged its funding to continue into 2019 following this successful pilot in autumn in which officers used SmartWater forensic liquid to forensically mark cans of beer rated at more than seven per cent.

The scheme saw SmartWater supply the force with six uniquely-coded bottles of SmartWater forensic marking liquid, each of which glows a separate colour when placed under a UV light. Six participating shops in the city centre then had a specific coloured liquid assigned to them and marked specific cans in their store.

Following its implementation, recorded street drinking offences were reduced by 60 per cent in the city, said West Yorkshire Police.

This meant that cans found on the street or street drinkers found in possession of cans could be traced, allowing officers to identify the retailer in question and offer advice and support.

As a result of the trial one retailer, Bierdronka, swept its shelves clear of high strength beer after the owner said he did not want to sell the type of strong alcohol which officers said was causing issues. Another, Ratnams Food and Wine, applied to have its premises licence changed after high strength beer recovered from a street drinker was traced back to the store. Officers from Wakefield District Police’s Licensing Department are now exploring expanding the scheme out to other parts of the district. Under the licensing act, retailers of alcohol have a duty to promote the prevention of crime and disorder and prevent public nuisance.

Inspector Richard Clare of Wakefield District Police, said: “We have been really pleased with the impact of this initiative in Wakefield City Centre and to be working with the support of Wakefield BID to extend what is proving to be a very successful scheme. “It has worked due to the input from retailers who have shown commitment to help improve the city centre and to withdraw products which we have been able to demonstrate are literally ‘fuelling’ anti-social behaviour.

“The fact that one store owner swept his shelves clear of beer above seven per cent speaks volumes for the impact this initiative has had. “We now have funding to continue the initiative into 2019 and plan to extend it out to work with other retailers further out in the District.”

Elizabeth Murphy, manager of Wakefield BID, said: “Our businesses wanted action on street drinking and this is a really positive step in the right direction. Anti-social behaviour has a major impact on both the economy and the perception of our city centre and it needs addressing. A small number of people have been causing significant problems, but by working together we can tackle this, start to change perceptions and further improve the city centre as a place work, visit and enjoy. All city centres face these kind of problems, but that doesn’t mean we have to tolerate them.”

Wakefield Police licensing officer, PC Chris Schofield, said: “Easily available higher strength alcohol has been the cause of a good proportion of the drink related anti-social behaviour we’ve seen on Wakefield’s streets and reducing its supply has had a real impact. “We know that street drinkers have been moving away from the city centre as it has become harder for them to obtain high strength booze, and preventing them from concentrating in an area is having a positive effect in terms of reducing anti-social behaviour and improving the feel of the city centre.”