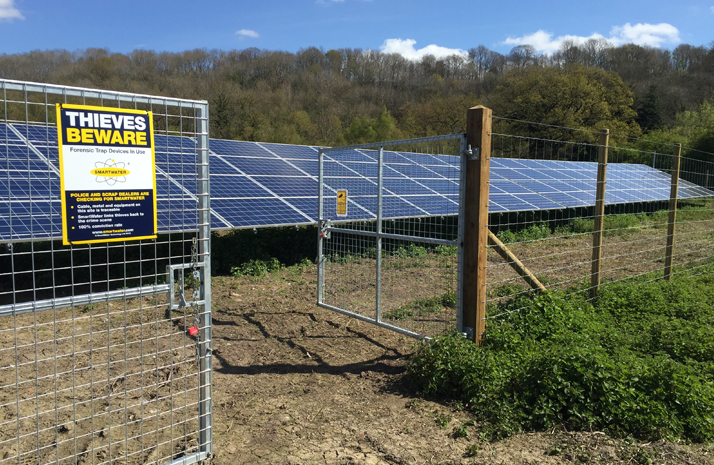 Solar panels worth thousands of pounds have been recovered by police after they were marked with SmartWater.

SmartWater, which already protects over 1 million solar panels across the UK, was instrumental in identifying the stolen panels. This came after more than 150 solar panels were stolen from a site in Deansford Lane in Kidderminster in March of this year (2019). However, the thieves were seemingly unaware that the panels had been marked with SmartWater, an invisible forensic liquid detectable only under a UV torch.

Following the theft an investigation was launched to catch the culprits and recover the stolen goods. A breakthrough came in early May and West Mercia Police, with the support of Staffordshire Police, visited an address in Chesterton, Newcastle-under-Lyme.

During a search of the address, a haul of solar panels were found and subsequent scanning using UV detection torches, found them to be marked with traces of SmartWater.

Subsequent forensic analysis provided by SmartWater scientists meant police could identify the panels as those stolen in the previous theft and two people were arrested on suspicion of handling stolen goods.

Intelligence gathered by SmartWater’s Special Support Team during the subsequent investigation identified that stolen solar panels were being exported to Spain. As a direct result of this work this disposal route was disrupted and a police led investigation continues.